Below is the second in a series of blogposts written by Tracey Warr responding to Remote Perfomances, the blogposts will be published daily on LADA's blog throughout the project.

This morning mackerel are boiling in the waters of the bay and Lee Patterson spots otter spraint on the rocks. Bram Thomas Arnold borrows a desk and chair from New Start Highland charity shop, lugs it up to the top of Cow Hill and performs ‘Swearing an Oath to a Scottish Glen’ against the distant backdrop of Loch Linnhe. Later in the day Bram reads an introduction to particle physics to a river. Lee, Ben Drew and Lisa O’Brien are foraging for sound up the glen. The tiny space of the Outlandia treehouse reverberates with Gaelic music: Ingrid Henderson’s clàrsach and The Cèilidh Trailers.

Geoff Sample has been recording nature sound in the Highlands for 25 years. Glen Nevis, he says, is the most extreme glen with the highest amplitude of relief in Britain, an unbroken drop from 4400 feet to sea level, and a unique acoustic space. Fewer insects and amphibians here mean that dominant sounds are wind, running water, birds and mammals.

Working with seven other writers – Nuno Sacramento, Alison Lloyd, Gillian Ness, Lorna Finlayson, Anne Claydon-Wallace, Gay Anderson and Carol Brock – I explore maps at the Lochaber Archive Centre. Words on maps are rearranged into our own texts. We imagine our way into the maps. Lorna Simpson’s enigmatic flash stories prompt us to use maps as visual aids to write our own.

In the afternoon we start at the Glen Nevis Visitor Centre, take some lines for a walk, write about portable objects we pick up on our walk. I pick up a brown stone with four flattened sides from the stream. As it dries it reveals itself as skin-coloured, freckled like a lover’s arm. Ed Baxter joins us, recording some of the writings and discussions. Arriving at the Wishing Stone Ed hops around it three times. It used to revolve to tell the future, but now it’s given up moving itself and we have to do the revolving.

This evening Bruce Gilchrist and Lee are out on the bay in a canoe at dusk with hydrophones recording shrimp cracking underwater. As twilight falls Peter Lanceley plays a haunting guitar accompaniment to Tony White’s performance of his story Stormbringer. Words roll and rollick like pebbles in the surf.

I am learning the moon for the new novel I am writing. Tonight the moon is Waxing Gibbous. Moon jellyfish dangle tentacles in the sliding, dark waters. 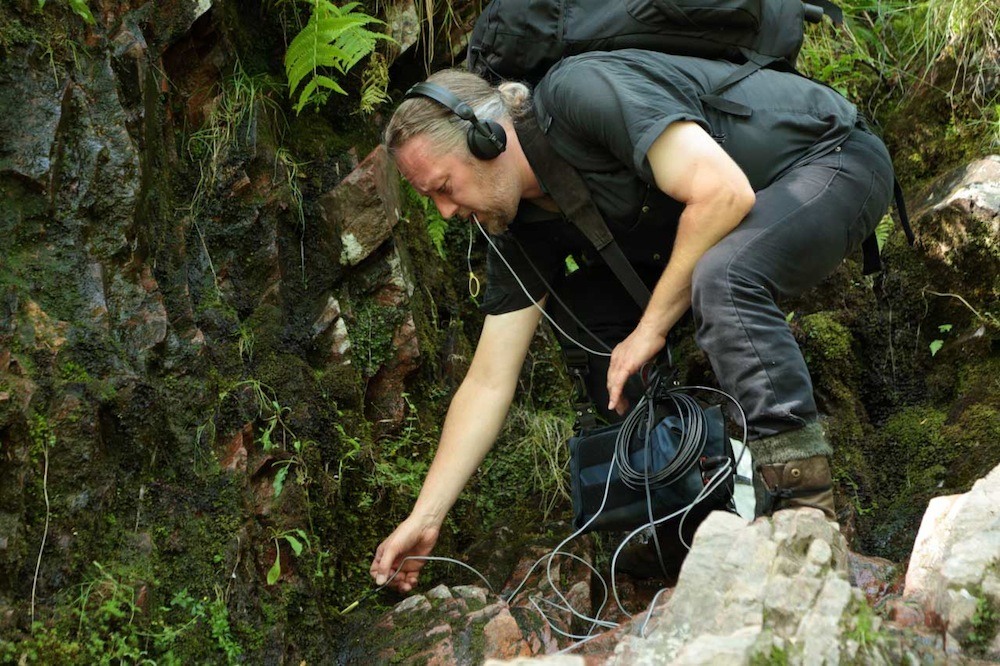 Lee Patterson foraging for sound around the Lower Falls, Glen Nevis in preparation for his artist broadcast. Image by London Fieldworks. 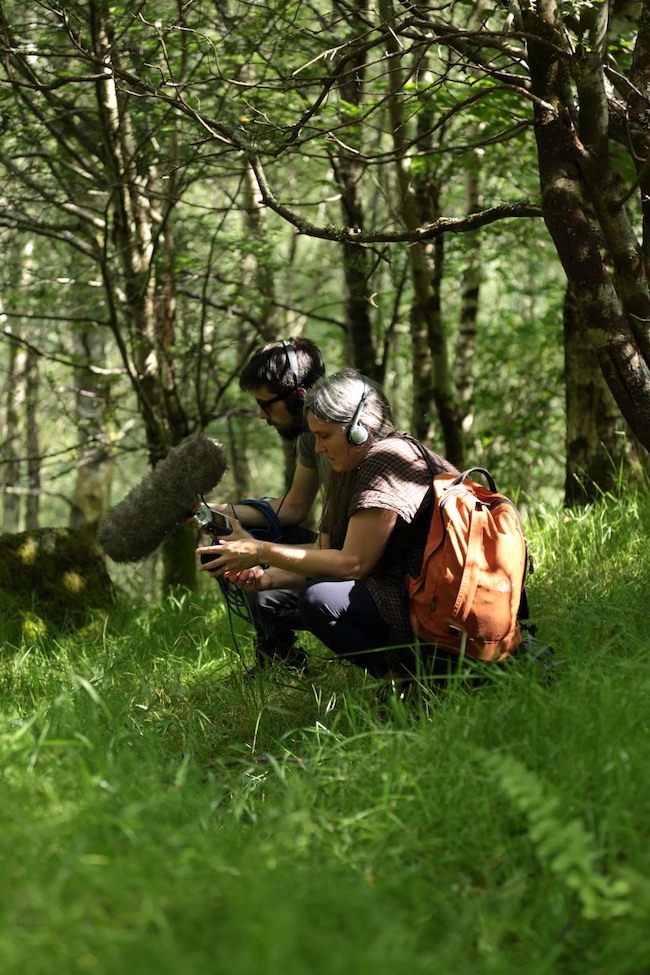