Remote Performances: Day 1 – What is Remoteness?

Remote Performances is a collaboration between artists London Fieldworks, Resonance104.4fm, (the world’s first art radio station), and LADA. From the 4 to 9 August 2014, 20 specially commissioned artist performances and programmes created with local residents are being broadcast live from Outlandia, a unique artists' field-station in Glen Nevis, Lochaber, Scotland.

Remote Performances will be broadcast daily from 12-4pm (listen live)

Below is the first in a series of blogposts written by Tracey Warr responding to Remote Perfomances, the blogposts will be published daily on LADA's blog throughout the project.

What is remoteness and where is it? Twenty artists converge on Fort William
to engage with mountains, forest, loch. Resonance 104.4fm radio decamps
from London to a temporary studio in Outlandia, an artists treehouse in Glen
Nevis. A cèilidh band cram into the tiny tardis space. It is a struggle to
broadcast in the face of grim weather and difficult topography – Ben Nevis
mountain opposite, large trees in the way. A satellite moves overhead hoping
for an ecstatic jolt of connection with the antenna, a thwarted technological
mating.

The sea is a few feet from the house. This morning a yellow lobster trawler
circles the bay, waves colliding with rock ramparts. Fingers of wet volcanic
rock test the waters. The view shifts minute by minute with weather and tide.
Low roiling clouds look at the sea and at the land as if in a mirror. The ground
is wildly hummocky. Air smells of soil, seaweed and pine cones. A stone seat
lodges like a cushion in the crooks of a tree’s many elbows. Water drops
silver in matted grass, trickle to part long reeds, slip down banks, barge past
rocks in the stream, thunder over small falls, linger in peaty rock pools.

Sarah Kenchington clambers across a litter of huge rocks on the beach.
Washing machine hoses, a trumpet, inner tubes, a foot pump, marigold gloves
wave loose like tentacles from her backpack. Everything is connected
together with balloons, improvised washers and sticky tape and then fixed to a
long pipe washed up in the wrack line. The sea adds its own spit and low bass
note to this wind instrument in the surf. Dusk falls over the bay. Rocks are
black hump silhouettes like whales against pale blue and pink streaks of sky.
A pine marten comes to eat a jam sandwich on the deck.

Remoteness is fluid. It is spatial and temporal, psychological and geographic.
In remoteness, removed from daily routines and networks, the self and the
world become strange new locales for exploration and reportage. 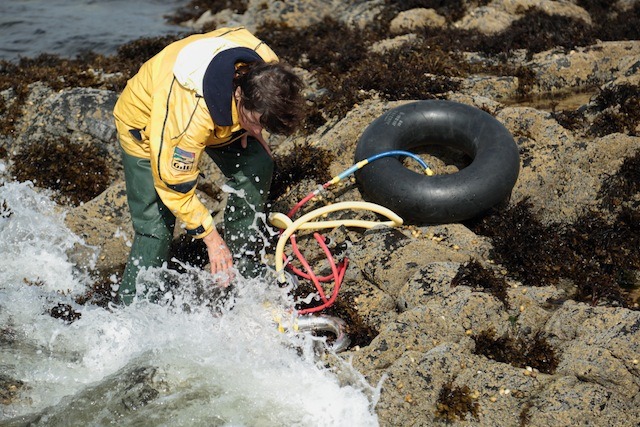 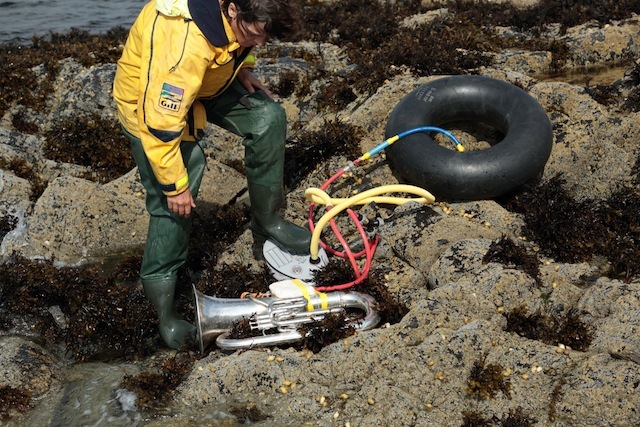 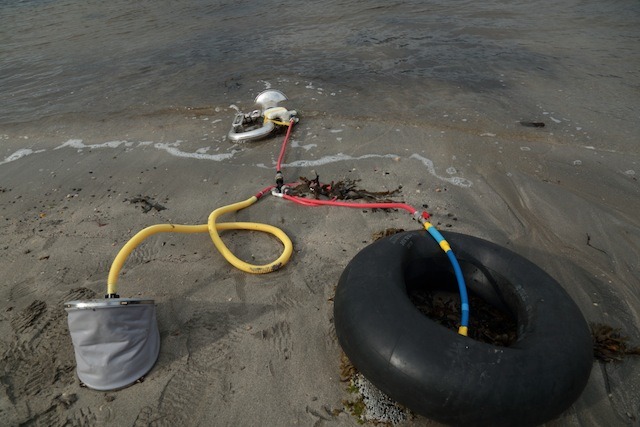 A statement from LADA on organisational change

A statement from LADA on organisational change.

We are delighted to announce that the recipients of the Katherine Araniello Bursary awards are Katayoun Jalilipour and Tammy Reynolds.