A film essay by Marion Scemama, co-directed with François Pain (2018)

“Thirty years in the making, Self-Portrait is an astonishing document of influence, friendship, love and the effort it takes to figure things out. Composed in the present from archival materials, it’s also the most historically truthful depiction of Wojnarowicz and the cultural moment he lived in that I’ve seen.”
Chris Kraus, Sleek Magazine

LADA is delighted to host the first UK screening of Self Portrait in 23 Rounds, a film about the work and life of David Wojnarowicz. We will be joined by the filmmaker Marion Scemama and photographer Andreas Sterzing, who will be in conversation about their relationship with Wojnarowicz since the 1980s.

Political artist, painter, writer, performer, photographer, David Wojnarowicz died of AIDS in 1992 in New York. He was one of the leading figures of the New York Downtown artistic scene of the 1980s.

By confronting death and the AIDS crisis to the tough political context afflicting the most vulnerable people and all those left behind by the American dream, he quickly emerged as one of the main protest and radical artists in the Reagan-Bush years. Told through the voice of the artist, this unique document reveals how Wojnarowicz viewed his work and own death in a society that refused to confront the AIDS epidemic. The film includes previously unseen images from the director’s personal archives as well from Wojnarowicz’s archive.

The main thread of the film is a 4 hour interview conducted in May 1989 by Sylvere Lotringer, founder of Semiotext(e). Filmed in his loft, Wojnarowicz speaks about confronting his own death, AIDS, desire, sexuality, his work, the use of rage in his commitment, and the numerous contradictions he was going through at this time of his life.

Alongside the film we will also be presenting a series of photographic images of Wojnarowicz taken by photographer Andreas Sterzing.

About the World AIDS Day Screening

The LADA World AIDS Day screening is an annual event which marks a significant  artist who has influenced Live Art and performance. This is the third in the series of screenings – in 2017 we presented Roy Cohn/Jack Smith by Ron Vawter and in 2018 we presented Theatre Visionary, a film by Adam Soch about the life and work of Reza Abdoh.

We will be collecting donations for Positive East on the night.

Books on Wojnarowicz on Unbound

For more information about David Wojnarowicz you can check out the following titles, available in Unbound online book store:

Fire in the Belly by Cynthia Carr, the first biography of Wojnarowicz

Weight of the Earth: The Tape Journals of David Wojnarowicz (Eds. Lisa Darms and David O’Neill) where Wojnarowicz’ talks about his frustrations with the art world, recounts his dreams, and describes his rage, fear, and confusion about his HIV diagnosis. 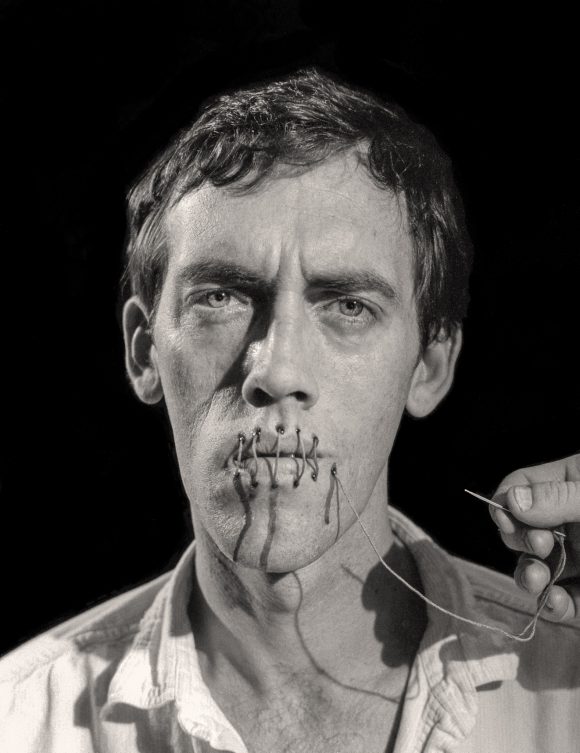 Marion Scemama is a French photographer and filmmaker based in Paris. In 1983, she met David Wojnarowicz in New York where she lived for five years. From this encounter was born a special friendship that lasted for nine years, marked by a mutual support and numerous collaborations (photos, texts and videos). In 1991, one year before David  Wojnarowicz’s death, they undertook together a journey into the American South-West, which would become his last trip.

In 1983, German photographer Andreas Sterzing became friends with and photographed New York artists David Wojnarowicz and Mike Bidlo, who invited other artists to work in the spectacularly derelict Pier 34. Andreas’s photo essay about the Pier 34 project and magazine stories about the East Village art scene kicked off his career in New York as an editorial photographer. The Pier was demolished in 1984, leaving photographs as the only evidence of its transformation into an anarchic location for artistic and creative expression.  In 2016 an exhibition at Hunter College Art Galleries in New York revived interest in this all but forgotten chapter of the New York art scene. Since then several slideshow versions of Andreas’s photographs from the Pier and the East Village have been presented in museum and gallery retrospectives of David Wojnarowicz and East Village art, in the USA, Europe and Asia. Andreas is now based in London and Cornwall, where he is a senior lecturer in the Institute of Photography at Falmouth University.