Online and on zoom

On Thursday 7th July, join us for the online launch of Miranda Whall’s Crossed Paths – Scots Pine (2022), a film documenting the artist crawling through the centre of Glasgow to the area hosting the COP26 United Nations Climate Change Conference in November 2021, carrying a 6-year-old potted Scots Pine on her back.

Miranda will talk about her practice, present her recent series of tree crawling performances and short films, and engage in dialogue with LADA’s Co-Director Vivian Chinasa Ezugha.

Crossed Paths – Scots Pine premiers as part of LADA Screens and will be available to watch online from 4th July until 4th August 2022.

Miranda Whall’s performance practice employs crawling as a tool that enables her to embody, inhabit and understand a place and its narratives from a four-legged rather than two-legged perspective. So far she has crawled through mountains, woodland, rivers, seaside promenades, tidal mudflats an island and urban centres. On Saturday 6th November 2021 she crawled with a 6-year-old potted Scots Pine on her back through the centre of Glasgow – from the Glasgow Sculpture Studios on Dawson Road to the COP26 Green Zone in the Science Centre on the Clyde Waterfront Regeneration area. Passers-by ignored, laughed, stared, cheered and filmed as the tree and Miranda silently and determinedly made their way through heavy rain and high winds to reach their destination. The intention of Miranda’s heroic/tragic/comic slow and gentle art activism is an expression of her grief, despair and outrage with a world dominated by corporate and personal greed and an insistence that non-human nature, and in this case trees, be put at the centre of discussions on how to mitigate the climate emergency and ecological crisis. Animals, plants, trees, air, earth and oceans should be, metaphorically, sitting at the discussion table with heads of government and delegates.

Miranda’s hope is that crawling to the COP26 United Nations Climate Change Conference carrying a tree, that was equal in size to her body, might inspire human beings to re-think and re-align their relationship to trees, seeing them not only as a resource to use and abuse but as an ally and a vital source of knowledge. She believes that we all literally need to get down from our human centric, two-legged, dominant and hierarchical position and start recognising our non-human vegetal others as equals, and as sentient beings with a voice – that we crucially need to listen to if we are to find a way out of our human made catastrophe. 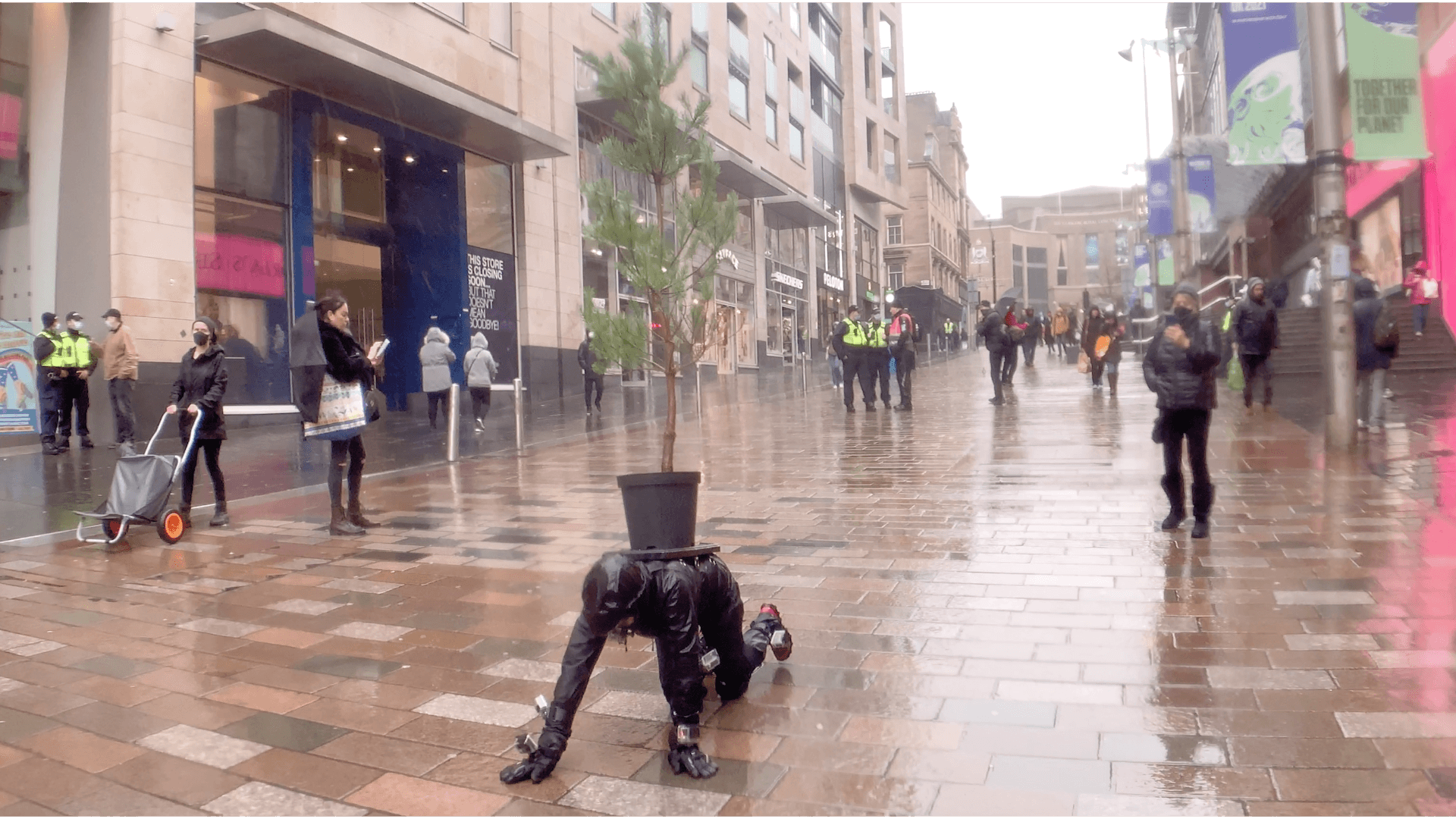 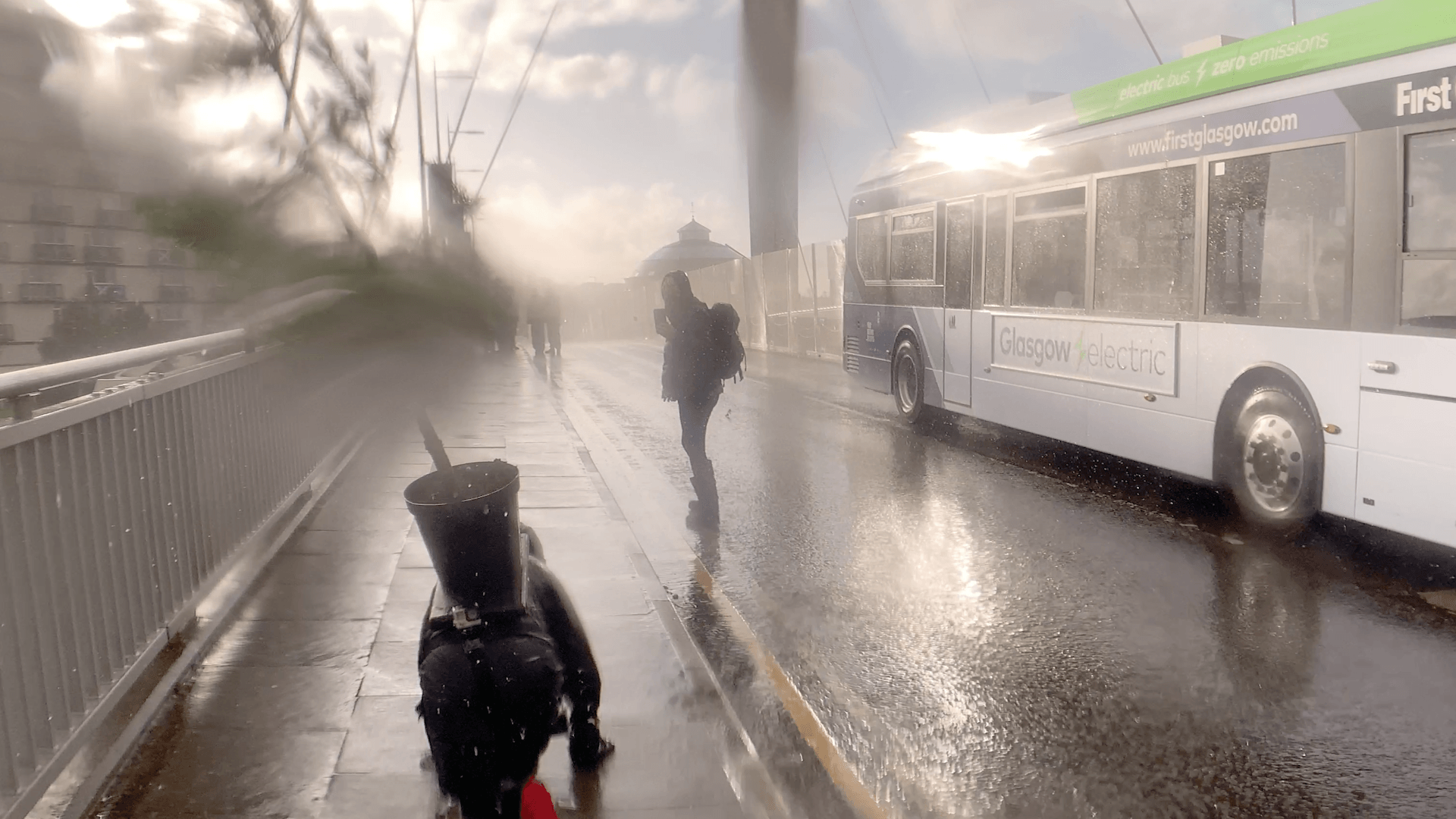 All are welcome to join in a relaxed virtual space, with or without your camera on. British Sign Language interpretation and captioning will be available.

We strive to make events accessible in support of d/Deaf and disability communities. Should you have any particular requirements regarding access not listed or have any questions, please email us and we will be happy to offer further support.

Miranda Whall studied her undergraduate in fine art at UWIC, Cardiff and the Emily Carr School, Vancouver, Canada, her postgraduate in sculpture at The Royal Academy Schools, London, and was an associate student at Goldsmiths College, University of London. She has exhibited internationally since 1997 and was recipient of an Arts Council Wales Major Creative Wales Award in 2012 and an Arts Council Wales Large Production Grant in 2017/18. Recent solo shows include Crossed Paths – Sheep at Oriel Davies Newtown, Wales in 2018, and Passage at the Institute of Contemporary Interdisciplinary Art, Bath in 2015.

Miranda has undergone 18 international residencies, has been the recipient of numerous Arts Council England grants and has curated and organised a multitude of artists and student exhibitions. She has commissioned artists, musicians, writers, poets, actors, photographers, filmmakers and dancers to collaborate in her projects. Miranda is currently working on a NERC Discipline Hopping funded project with a sci-art team and the Pwllpeiran Upland Research Centre, Aberystwyth University, and a public tree crawl for the ArtBomb Festival in Doncaster in August 2022. 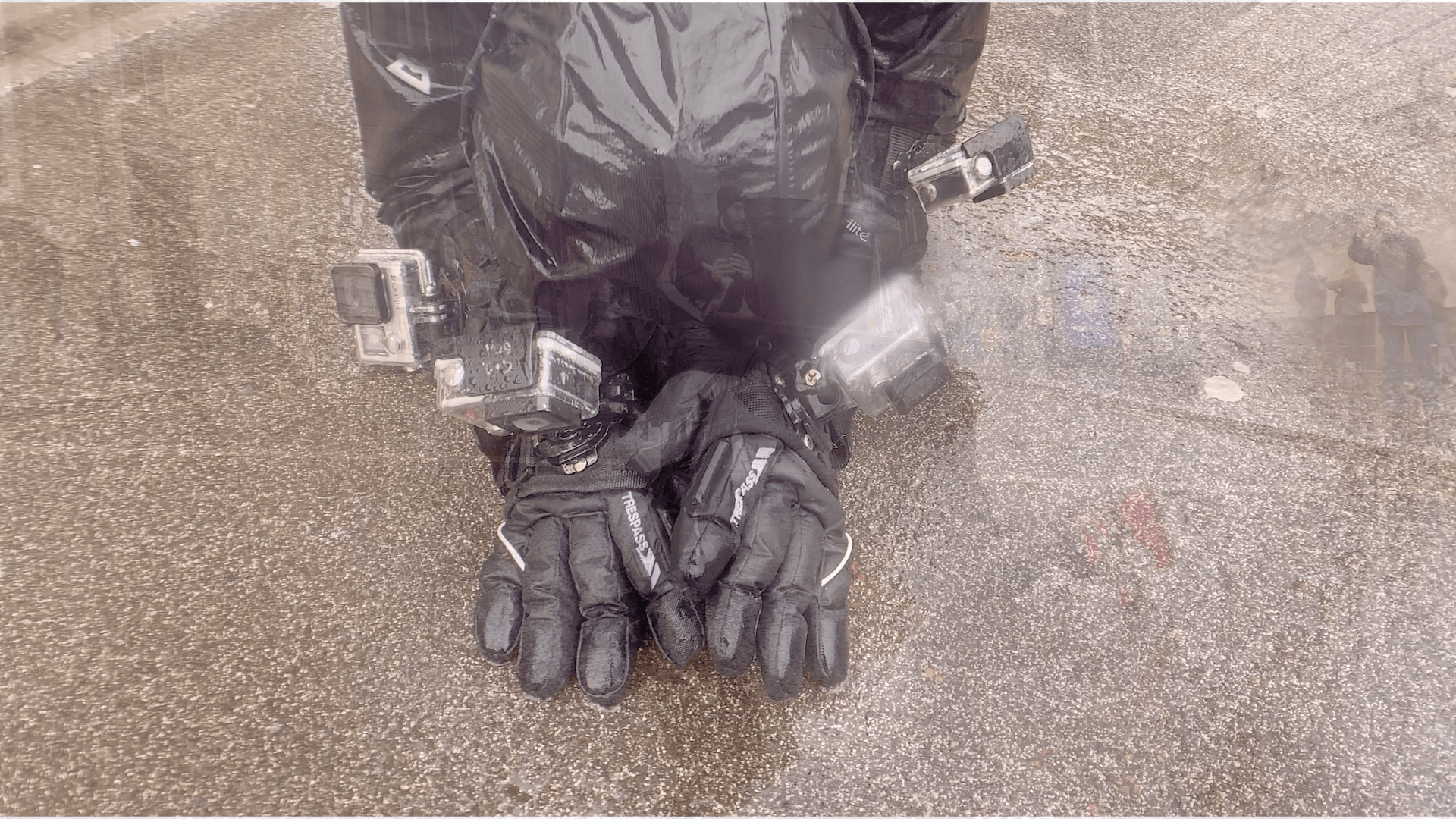 Each screening will be available to view for a limited time only.