Documenting Live is a unique publication and dvd resource reflecting the work of key UK based artists working in the 1990s and 2000s, and placing Live Art practices that are informed by questions of cultural identity within critical and historical frameworks.

Documenting Live has been developed by the Live Art Development Agency, curator David A Bailey and Project Director Rajni Shah in response to the challenges of documenting Live Art, and particularly the influential work of artists from culturally diverse backgrounds in the UK.

Recognised as a practice that operates within, in between, across, and at the edges of visual art, theatre, dance, poetry, digital media and the moving image, Live Art is often an interdisciplinary, itinerant and ephemeral area of contemporary arts practice. Inevitably there are many challenges in the documentation, archiving and contextualistion of such work, and these challenges can lead to the exclusion of significant artists and approaches from wider cultural discourses and art histories. This is particularly the case for artists concerned with questions of identity, difference and the complexities of ‘cultural diversity’, whose experiences and practices are often sidelined within UK’s cultural histories.

Documenting Live sets out to address these challenges through the creation of an archival and critical document that maps a history; marks a territory; and looks to the future. It has been developed as a resource for artists, scholars, students, curators, historians, policy makers, and anyone interested in the cultural landscape of the UK.

In their illuminating and provocative contributions, the participating artists reflect on the people, movements and ideas of the 20th century moment that have influenced, and continue to influence, their own performative practices; consider the formal, conceptual and cultural issues informing their work in the 21st century; and offer invaluable insights into the different histories and experiences of black artists in the UK, and the evolving and shifting nature of Live Art itself.

Documenting Live contains David A Bailey’s mapping essay Performance-Based Art and the Racialised Body; the artists’ postcards; and a dvd featuring the artists’ commentaries, excerpts from key works, and documentation of the round table discussions.

“Documenting Live is a pioneering project. Live artists who come from non-European cultural avant-garde histories are constantly fighting the strategic amnesia and ethnocentrism of the dominant art world. If we are lucky, we become a one-liner in the history of art. But more likely we will be lumped together into a generalizing cultural movement that came as fast as it evaporated. It is clear we have to write our own history, draft our own map and document projects in our own terms. This epic documentation project generated by the Live Art Development Agency in collaboration with David A. Bailey and Rajni Shah functions as a very comprehensive map detailing the practice of UK-based experimental artists whose cultural roots span several continents and artistic languages. The beautifully designed package contains artist-made biographical postcards, a very sharp essay by curator Bailey and an incredible DVD with artists’ commentaries and excerpts of their work. Ultimately, the compilation provides the reader/viewer an incredible insight into one of the most vibrant live art scenes in the world. I am envious. My Latino colleagues in the US are also envious. We truly wish live artists here had a similar project. Sadly, there is nothing of this nature in our part of the world.”
Guillermo Gomez-Peña, 2008

“If, by its very creation, Documenting Live highlights the growing gap whereby mapping and documentation is fast being out-paced by the speedy trajectory of the art-form itself, it has already succeeded in alluding to the disappearance and loss of history which has gone before, and of the potential loss of work still to come. It succeeds on many more levels than this however – through retrospection, it begins to join the historical dots of Live Art’s roots, and as a result equips a new generation of artists, writers, critics and curators with a culturally contextualised map, by which to navigate forward, into new, uncharted territory.”
AN Interface, 2008

Read a review of Documenting Live on the Culture Wars website here.

This title is now SOLD OUT but can be viewed in the LADA Study Room.

Documenting Live builds on a 2002 collaboration between the Live Art Development Agency, Aavaa (African and Asian Visual Artists Archive) and motiroti – a cdrom interpretation of motiroti’s celebrated participatory performance Wigs of Wonderment. Documenting Live has been commissioned and published by the Live Art Development Agency in 2008 as part of Restock, Rethink, Reflect, a programme of initiatives for artists exploring and questioning notions of cultural identity. 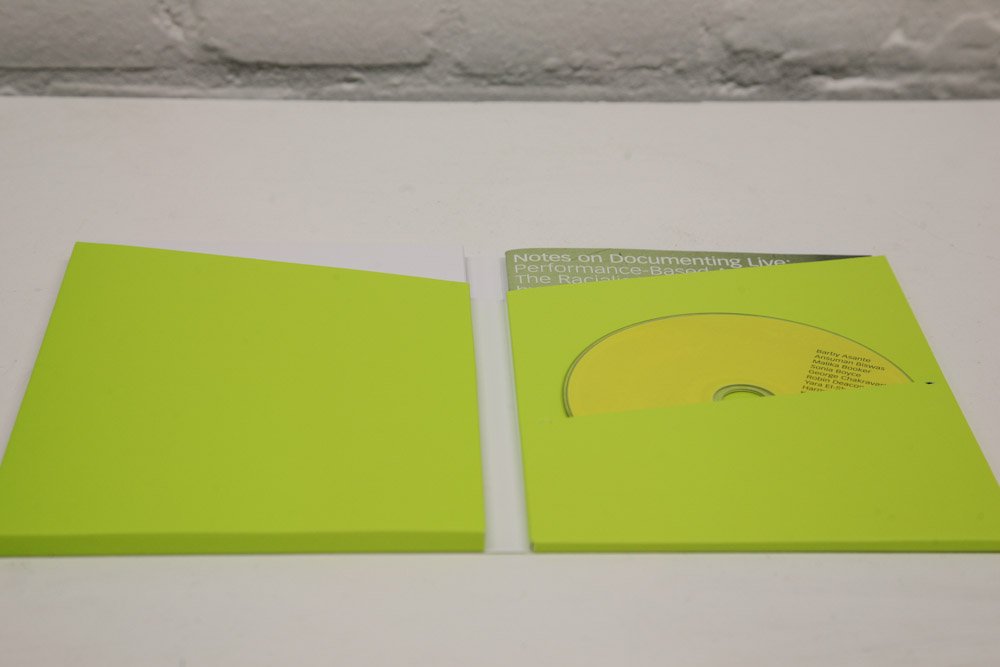